2012 NBA Draft: Comparing mock drafts from around the web

Share All sharing options for: 2012 NBA Draft: Comparing mock drafts from around the web

The 2012 NBA Draft will take place on Thursday, June 28. The Bulls have only the 29th pick. It's unsure whether or not they'll trade to move up or gather more picks.

Looking at mock drafts are most useful not for pinpoint predictions, but to see the ranges at which players are likely to go and display a good range of players who will be available to the Bulls; which is why I expanded these mocks to go through the first ten picks of the second round.

The consensus top pick is Anthony Davis. Thomas Robinson and Bradley Beal are becoming the consensus #2 and #3. After that, top tens are very similar with differing orders, but the top seven all include Harrison Barnes, Michael Kidd-Gilchrist, Andre Drummond, and Damien Lillard. In the past weeks: Lillard entered this group; Beal has shot up the boards; and Drummond has fallen from what was seeming like a guaranteed top four to somewhere in the #4-to-#7 range.

After that, Austin Rivers' rising stock is pushing down that of Jeremy Lamb -- and to a lesser degree that of Meyers Leonard, John Henson, and Tyler Zeller, but the top 20 are fairly recognizable.

The polarizing views on Quincy Miller and Tony Wroten, the elite shooting with nothing else to bring to the table has John Jenkins all over the place, and Jeffrey Taylor looking like a first round guarantee gives a better picture of the Bulls' options.

So, after all of that, here is your clusterfrack of mock drafts.
The first and second columns are two mocks by me, yet different. The first is who I would pick were I each team -- obviously having less information than them; and the second is how the draft is more likely to go, judging not from the players' skill and potential, but of their stock. The third is a 'who each team should pick' mock, performed by SB Nation bloggers over the weekend in the draft order (including myself picking for the Bulls); The fourth is from Scott Howard-Cooper at NBA.com; the fifth is Chad Ford's Mock Draft 9.3 at ESPN.com (#31-#40 are from 9.2) ; the sixth from DraftExpress.com, which is as of this morning; and the seventh from David Aldridge at NBA.com, posted this morning.
Discuss away (click to enlarge): 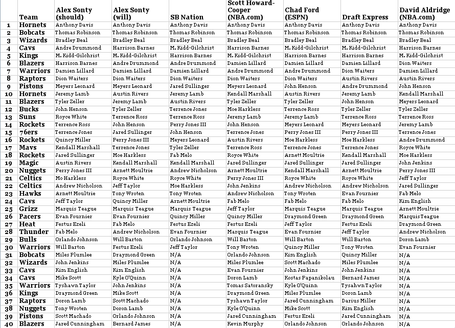