We've been doing playoff threads on the sidebar, but tonight's a special night as before the game the annual draft lottery will be held.

Here's everything you need to know about the odds. Somehow this process has been stretched into an entire half-hour of television by ESPN, ruiner of everything. It'll likely feature analysis by five people who've watched a combined 2 Bobcats games this season.

The Bobcats do have the best chance (25%) at winning. This is one of the few rooting (against) interests for Bulls fans, as the better the 'cats get, the worse their future draft pick owed to the Bulls will seem. Beyond that, I'm guessing we should just hope Anthony Davis stays in the Western Conference?

If you want some sentimental reasons to pick a crappy team to like for a night, SBNation's bloggers of lottery teams made their case at the mothership. All news from the night will be dutifully populated at the lottery storystream.

Then...Heat/Celtics, I guess. I'm not even sure I can claim I'm completely against the Heat in this one, as if the Celtics somehow won their insufferable fans would just become worse. At least the Heat have no real fan presence to annoy me.

I guess the best way to get through tonight is to remember the good times, the 1.7% chance mentioned BaB's tagline. 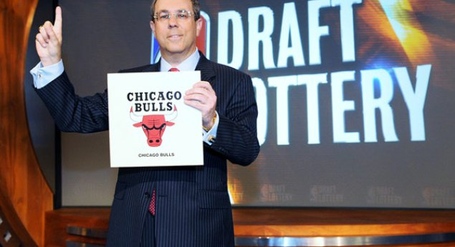 "I just brought this team sustainable profits contention for a decade!"