[This will be the first in a series -yfbb]

The Bulls' offseason will be a little complicated, as they'll have to navigate being over the salary cap. Before entering the free agent period in July, the organization will have to decide how to use exemptions, decide which options to pick up, which to free off the books at what price, and whether or not it's advantageous to enter luxury tax territory.

It's most important before looking at these changes -- realistic, idealistic, hare-brained, potential, etc. -- to examine, the status quo of the books. 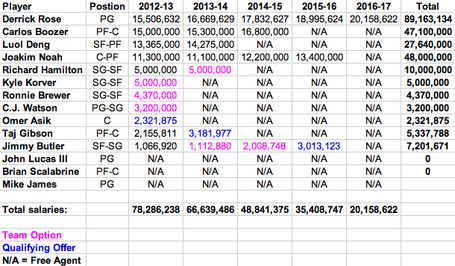 All contract and salary details are according to ShamSports.com as of January 5, 2012. I added Mike James to the list to make it current. The totals include team options and qualifying offers. This spreadsheet is publicly viewable here.