Bulls vs. Sixers, 2012 NBA Playoffs: Where Bulls offense is more in the hopes of Rip and Korver

Share All sharing options for: Bulls vs. Sixers, 2012 NBA Playoffs: Where Bulls offense is more in the hopes of Rip and Korver

The Bulls are without Derrick Rose for the remainder of the playoffs with a torn ACL. With a 1-0 lead in the first round over the 76ers in their seven-game series, a giant collapse would be necessary for the Bulls to still not move on to the second round against the Celtics or Hawks.

No one is going to get more easy bucket opportunities than Carlos Boozer, no matter how aggressive he is, but playoff buckets get tougher on the inside. Defenses play with lesser margin of error in their minds and efficiency in the halfcourt is dependent on stretching the floor with shooters and wearing down defenders by making them chase those shooters off the ball.

This is how Kobe Bryant, Manu Ginobili, Ray Allen, and Richard Hamilton have aided their teams most toward championship runs over the last decade. Their teams were able to find wins when these wing players had some of the most awful shooting displays we've seen simply because you can never leave them alone and that's a tall task on every possession by itself.

Tom Thibodeau's offensive strategy is commonly over-simplified and misunderstood as Rose crashing through defensive walls to hit circus shots in challenging situations. Gar Forman and John Paxson have put two of the better off-ball nuisances in the NBA -- Rip and Kyle Korver -- on this Bulls team for this particular tactic, fitting into the actual overall strategy to punish defenses for over-committing in any direction.

With or without Rose, the efficiency of the Bulls offense is more in breaking down defenses, effective ball movement, and second chance points -- all of which are now heavily dependent on Hamilton and Korver's off-ball movement and decision-making.

They're always forcing two-to-five defenders to know where they are, and they're always changing the definition of "where they are". It can amount to nothing in a couple of possessions, but the fatigue in the defenses carry over to the following possessions and -- all of a sudden -- they're creating open looks in ways that look easy.

When the ball is moving at its best, defenses struggle all the more to keep tabs on Hamilton and Korver. And when those defense are performing best, they flood pressure toward Hamilton and Korver; but in those processes, open up a lane for someone to cut to the basket or another shooter open on the weak side of the floor. And Hamilton and Korver, again, see this well before catching a pass, making their quick second pass into assists look easy.

When they don't take shots and defenses are forced to over-commit to the paint, as their only hope to kill possessions against the Bulls' elite rebounding, Hamilton and Korver move their feet on the perimeter to keep themselves in rebounders' vision and at the end of open passing lanes. In those cases, they make second chance, wide open buckets look easy.

And when they miss, they're still forcing great two-way players to consume amounts of energy that make those opponents less effective on both ends as the game wears on.

Hamilton and Korver played 8:29 together in Game One over two shifts -- closing out the first half and the third quarter -- at a plus-ten. Over 70 minutes they played together this regular season, according to NBA.com, both of their individual plus-minuses skyrocketed. Korver's shots went way down, but Hamilton's volume went way up with his efficiency: 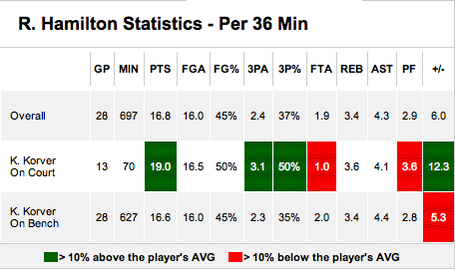 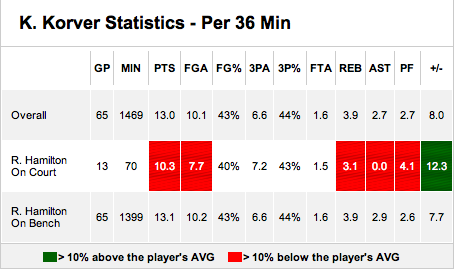 Them playing together is just beautiful basketball for the enthusiast to observe and creates all the more pressure and breakdowns for opposing defenses. But there's also the time when they're apart which carries more value now, as the Bulls scoring resources are all the more scarce without Rose, Brett Koremenos writes:

The biggest adjustment is that Tom Thibodeau must have either Kyle Korver or Rip Hamilton on the court at all times. The threat that both those players bring coming off screens is the one surefire way the Bulls can shift a defense and use their excellent ball movement to find the open man for easy looks. With their devastating defense, Chicago may only need to reach the 90-point mark consistently to keep advancing. Korver and Hamilton running opponents ragged through screens is probably their best bet to get there.

We'll continue to see them on the floor together as the five-man unit on the transitions from starters to bench players and vice versa. In those spurts, we'll see how the one coming in has been setup by the other. And those times will look beautiful, as Luol Deng will be playing more power forward against Thaddeus Young. But the Bulls will llikely look their worst if there are moments where neither Rip nor Korver are on the floor. Hopefully, Thibs doesn't challenge that theory for us to see it.