Share All sharing options for: Derrick Rose out for season: Bulls starting lineup with C.J. Watson at point guard

Derrick Rose is out for the season after tearing his ACL in the Bulls' Game One blowout over the 76ers. The Bulls went 18-9 in their 27 games (against a lot of bums) without Rose this regular season.

In ten of those 27 games, Tom Thibodeau went with the starting lineup we can expect for the remainder of the postseason -- Joakim Noah, Carlos Boozer, Luol Deng, Richard Hamilton, and C.J. Watson. The offense was more efficient; the defense, not so much. The sample size is also small (only 112 minutes) and four of those games were against the Cavaliers and Bobcats, but the per-48 minute production is encouraging: 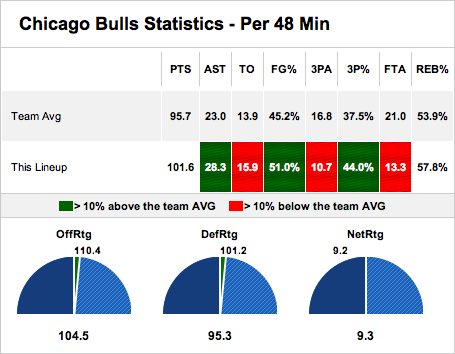 Watson -- battling injuries himself throughout the season -- had a career-high 25 starts this season when Rose had to sit out. He arguably had a career year in the process.

Coming to the Bulls from the Warriors as a scorer before the 2010-11 season, Watson's developed a stronger game as a quarterback -- playcalling, using his handles to move opposing defenses, navigating beyond the arc off the ball to most efficiently use space. From that, the eye test has showed Watson to be a better player with better teammates on the court, despite facing stronger defensive players.

The turnovers look high for Watson and that starting unit, but that's measured up against a low-turnover prone Rose. This season was Watson's worst with turnovers, at a 16.7% rate. But his career rate is a strong 13.3%. (Keep in mind the league rate this season was 13.8%.)

Expect more than 29.2 MPG for Watson moving forward as well. His quantity of experience with the entire rotation is so much greater than the new second stringer, John Lucas III, that Thibs won't need to re-create new flows with substitutions. And this is the playoffs, where your best players need to be on the floor as much as possible.

The points-per-shot production is slightly better with Lucas than Watson, and the turnover rate is much better. But the usage rate is high enough to shut out better offensive players from possessions when Lucas is the fifth best player on the floor:

In addition to Lucas playing too many minutes with those starters is a waste of those starters' minutes, Lucas is most valuable picking up the slack while playing with lesser scoring options.

Most important, the two point guards who'll see much-increased minutes in these playoffs without Rose are highly trusted by the coaching staff and roster, while both being highly competent Lucas' lack of length can be a defensive liability and neither are nearly as explosive as Rose. Also, neither of them are being asked to make up for Rose's production. That production simply needs to get covered by the rest of the rotation players as a whole.

The Bulls finished one-tenth of a point behind the Celtics for the season's most efficient defense and more than make up for being an average shooting team by being the best offensive rebounding team in the league by far.

Rose's injury is devastating. It sucks. And it kills hope for an title this year for us Bulls enthusiasts. The Bulls' score a lot less, missing more shots, are less likely to blow out opponents, and are confronted with more problems without Rose than with him.

But let's not be silly. If the Bulls can't return to the Eastern Conference Finals, it'll be primarily because they played like crap to under-perform against the Sixers, Celtics, or Hawks. Not because they weren't equipped to beat those specific teams in a seven-game series.