The Bulls have only been able to play their pre-season projected starting lineup in 15 games, due to injuries, throughout this lockout-shortened season.

With only two games remaining, the lineup of Derrick Rose, Richard Hamilton, Luol Deng, Carlos Boozer, and Joakim Noah played together for regular starter minutes in the first three quarters of Wednesday's 92-87 win over the Pacers. The five-man unit played over 20 minutes at a plus-seven -- plus-11 through their 12 minutes in the first half.

For the first time, the five were on the floor together at the healthiest we'll see them this regular season after shaking off the rust of the off-season against something of a competitive NBA team.

The dilemma Tom Thibodeau is facing this week is between the banged up status of core players and the lack of time the unit has played together. "We still need to find some rhythm with guys," Thibs said after the game. "They need some time together."

How much more explosion Rose can muster up in the playoffs is yet to be known, but neither Deng nor Hamilton are getting any healthier without the type of rest only an off-season can grant. Rose's prudence fit with the objective to get into a better rhythm with Hamilton's aggressive off-ball freestyling. Hamilton was brick-tastic, but got the ball in good spots from Rose.

Rose leading the offense also allow for the Bulls bigs to step out onto the perimeter as strong threats to punish defenses for over-committing. Noah and Boozer are among the best interior passing big-men combos in the league, and flashes of brilliant passing was displayed with nothing short of five genuine scoring options on the floor.

The Bulls defense with these starters on the floor has been most impressive. Rose's speed with the length of Hamilton and Deng on the perimeter, and Noah's quartercourt help combine for one of the Bulls' most efficient defensive lineup. There's a high risk to the shooting tendencies of Hamiton, Deng, and Boozer, but the defense negates that by creating easy buckets with more opportunities to attack defenses before they can reset.

Here's the production of the starting lineup in their 254 minutes over those 15 games, according to NBA.com: 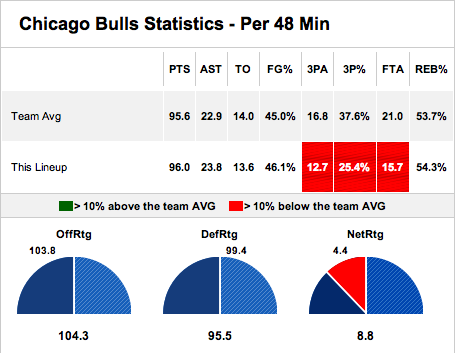 The downside is that aforementioned spot shooting, though. The passes aren't as well-timed, allowing for more efficient close-outs by defenders. This is where the element of rhythm and chemistry can only be cured by more minutes on the floor in a season where practice time was relatively non-existent. 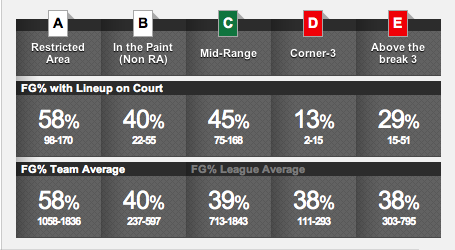 When defense clamp down and the game gets slower in the playoffs, that shooting is crucial to stretch out defenses. The Bulls learned this when opposing defenses made life hard by collapsing the paint. This season, the Bulls raised their 3P% from .361 to .376, without much of a shift in that volume -- 16.9 attempts per game, down from 17.3 -- when one considers the slower 91.3 pace of the NBA this season to last season's 92.1, according to Basketball-Reference.com.

By comparison, the Thunder starting lineup has played 664 minutes in 42 games and the Heat's played 535 minutes over 35 games.

Chemistry is a lazy buzz word to oversimplify more nuanced variables in the game. But two guards with games defined by their spontaneity play well together when the two understand each other's tendencies and cues. They play best when they're the only two on the floor with that knowledge.

Wednesday, Rose and Hamilton showed they're learning more and more. They showed enough to not just look well, but on which to build upon in the first round of the playoffs.