Share All sharing options for: Rip Hamilton closing out the season strong

Richard Hamilton has had problems just staying on the court, battling injuries throughout his first season with the Bulls.

The 34-year-old, three-time All-Star has been more than a role player as the Bulls have becoming increasingly shorthanded in April. Before this month, Rip hadn't played more than five consecutive games. Since his most recent return to the rotation, he's played eight games in a row, scoring at least 20 points in three of them, including 22 on 9-for-13 shooting (4-for-5 on 3s!!!) against the D-League-esque Bobcats on Wednesday.

"It's feeling better," Rip said after the game. "Each and every game, I get better. That's the good thing. When I first came back, the problem wasn't me getting to the spots that I wanted to get to . It was actually just gaining a rhythm and getting a feel for the game again. But every game, it gets better. I'm definitely pleased with what's going on. The rhythm and the timing, the timing of the game and that's for anybody. When you're away from the game this long, the biggest thing is just rhythm and timing."

With his minutes on such a low end, like any scorer, the numbers are inconsistent, but the percentages are going up.

He's also passing the eye test, showing good speed off the ball and the strength to effectively set his feet before his shot. The turnovers are still frustrating, but his decisions of when to pass and to whom to do so are about as good as ever -- a crucial trait of an off-ball, volume-shot creator.

Defensively, there is the concern that his energy usage on offense is slowing him down a bit on the defensive end, but his length and basketball I.Q. generally compensates.

Whether this is a a sign of what to expect in the playoffs or just beating up on scrubs is yet to be seen. There's still great concern that his injuries with those of Derrick Rose have only allowed them to play 356 minutes together in the backcourt. Largely concerning because Rip's greatest asset is his elite ability to freestyle off the ball, making it imperative that ball handlers know exactly when and how to get him the ball.

Keep in mind that the sample size is tiny and Rip hasn't had the chance to play healthy with Rose, but Rip's production is way up without Rose, compared to with him: 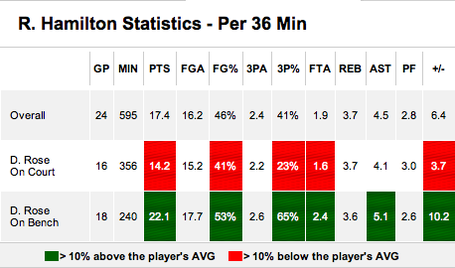 His best production has been with C.J. Watson at the point: 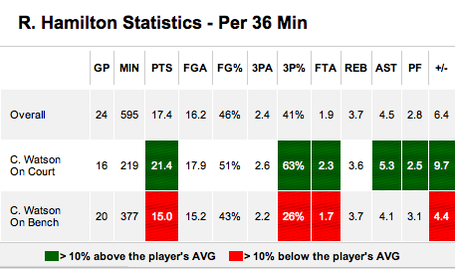 Again, the condition of Rip's health has been vastly different from the conditions under which Rip had to endure during an overwhelming amount of those minutes with Rose. But the dilemma may be valid: are the Bulls better off with Rip coming off the bench, splitting his minutes between those with C.J. and Rose?

Rip's production is so highly dependent on being in rhythm with the primary ball handler. One could argue that there hasn't been enough time to develop anything near optimal chemistry with either point guard, but that the path is better paved with C.J.

Rip off the bench could be the lower-risk approach, but the dilemma exists in that the Bulls' best chance to win a title -- regardless of Rose's limitations -- is having Rose and Rip playing at a high level together for as many minutes possible.

An argument could be made that Rip is simply bumslayin' through the poopiest poop slushes of the NBA, but the ways by which Rip is producing can be repeated against most opponents. If it's fool's gold, I'm becoming a fool.