In the Bulls' 96-86 overtime win at the United Center over the Heat, Joakim Noah was noticeably absent from the endgame strategy of Tom Thibodeau. But unlike many occasions last season where this was the case, Carlos Boozer wasn't sitting next to him.

Last season, with Noah injured and the limitations of Kurt Thomas, Thibs went to lineups with Boozer alongside Taj Gibson without a true center on the floor in mid-game shifts. Throughout his near-two-season tenure with the Bulls, Thibs has gone to small lineups featuring Boozer or Taj as de facto centers, Luol Deng at the power forward spot and dual point guard units in 850 minutes as a head coach.

The portion of time seems insignificant in the pool of around 34,000 minutes he's coached the Bulls, but looking at the East playoff teams and the production of those small lineups, Thibs promises to continue showing an elite intuition for recognizing the situations to go small.

The Heat don't have a seven-footer in their rotation. The Pacers are big, but start a stretch-four in David West. The Celtics are starting Kevin Garnett at center and a very shooty Brandon Bass at the four, while starting the 6'2" Avery Bradley at the two, and giving their only seven-footer -- Greg Stiemsma -- 13.3 MPG. Magic starting power forward Ryan Anderson is leading the NBA with 375 3-point attempts this season. Hawks power forward Josh Smith is compelled with the illusion he can shoot and Joe Johnson is frequently on the court with two other guards. The 76ers play Andre Iguodala at three positions, frequently play 6'2" Louis Williams alongside 6'3" Jrue Holiday in the backcourt, and the truer-SF Thaddeus Young at the four.

And the Knicks, who are still the most likely first round opponent of the Bulls, are led by Carmelo Anthony playing four positions.

All of these teams have played best with their smaller lineups, so Thibs understanding which small-ball combos work best are imperative to any playoff success for these Bulls in this Eastern Conference. The numbers show he knows exactly which combos to use.

Boozer or Taj at center

In 2010-11, this combo was a bit of a disaster because both are best alongside the active feet of Omer Asik and Joakim Noah showing hard on penetration. Though the two shot higher percentages together, the plus-minus of the combo was worse than their overall plus-minus on the season, as opponents' possessions constantly ended with buckets and the two looking at each other without a clue of what just happened: 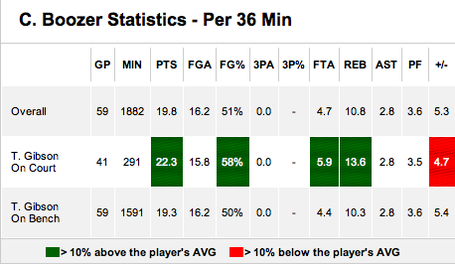 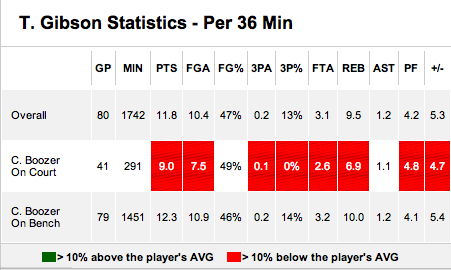 In this 2011-12 season, it's a different story. Taj's baseline help was never a problem last year, but this season, he's much smarter with his aggressiveness in anchoring the paint -- as Garnett is asked to do in a similar defense -- to fill the void of not having Noah or Omer performing that task. The lineup has seemed, in my opinion, to work best against teams with either: (a) no seven-footer on the floor; or (b) the effective power forward playing a lot of isolation.

This makes sense, as the Bulls simply just need strong man-defense, rebounding, and easy buckets against these lineups: 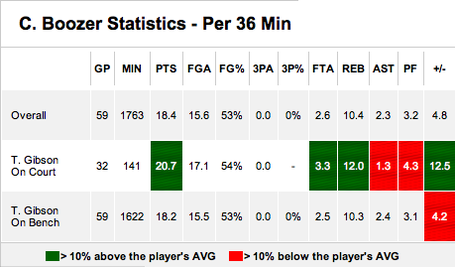 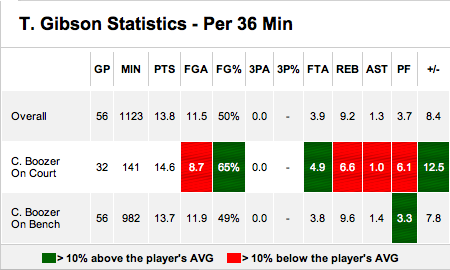 This endgame unit, when scoring is needed in a slowed-down game, has shown to be useful most notably against the Heat, Knicks, and Magic this season. But there are lineups and situations that occur more often, where the Bulls are threatened by power forwards spot shooting, getting fed by penetrating ball handlers in inside-out offenses. In these situations, we've seen Thibs' favorite weapon to go small: Deng with three guards and a big.

Deng at the stretch four

The two players Thibs trusts to defend the entire halfcourt -- whether it's a ball handler on the perimeter or top of the key along with post defense -- are Deng and Noah. What separates Noah is that his primary duty is anchoring the paint to prevent penetration, so when Noah steps out, it's to check, show, or trap a ball handler. Deng, on the other hand, is called upon to do all of that, along with chasing perimeter scorers off the ball.

This situation was impossible to find using the NBA.com filters, so I went through every 5-man unit in Basketball-Reference.com's Lineup Finder in which Deng has played since Thibs arrived. Then, isolated the lineups in which Deng at least a minute with a perimeter unit featuring three shorter players not named Boozer*.

Last season, in 3,208 minutes, Deng was a plus-5.8-per-36 minutes. In the nearly 405 minutes at the stretch four I qualified, he logged a ridiculous plus-12.5-per-36 minutes in those combined lineups.

This season, with more trust embedded in Taj to take on those duties and orchestrated switches, Deng has only played 64 of his 1,968 minutes in those situations. But, still, he's a whopping plus-24.8-per-36 when doing so, compared to an overall plus-6.5-per-36 on the season.

The least used small lineup is by far the least significant, as it's solely an endgame strategy for Thibs. It's in games where on-ball defense is so strong that the primary ball handler needs to alternate between both guards or against teams beating the Bulls with dual point guards in their backcourt.

Last season, this lineup was exclusively Derrick Rose and C.J. Watson as a backcourt unit, allowing each other move off the ball and consistently maintain leverage against opposing small backcourts alternating the primary ball handling duties. Rose's numbers with C.J. are less impressive, but those for the team's plus-minus increased by a significant percentage last season: 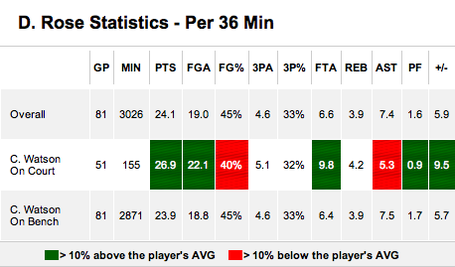 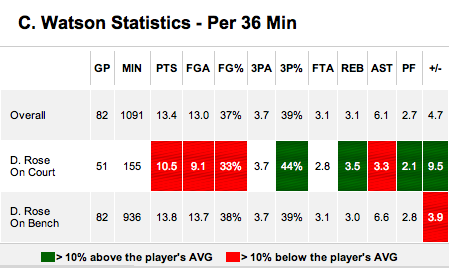 This season, the two have only played 71 minutes together, as they've both battled injuries throughout the season. In those minutes, Rose's plus-7.0-per-36 only goes up to plus-7.6

This season, John Lucas III has ranged from hero to disaster, as injuries to Rose and Watson have called upon the third stringer to make things happen. But in 630 minutes, Lucas is a plus-10-per-36, and those numbers go down alongside Watson.

What's remarkable is how Thibs has maximized the usage of Watson as an effective shooting guard, as Watson's plus-1.9-per-36 skyrockets alongside Rose or Lucas this season: 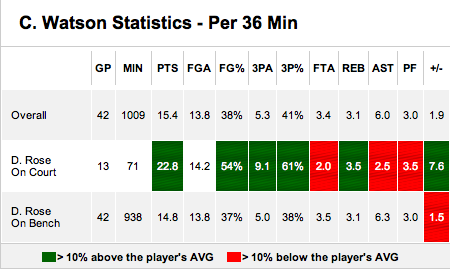 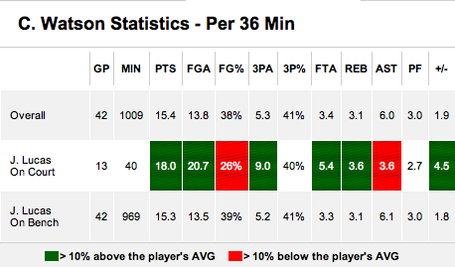 I was convinced going into last night's matchup against the Heat that there wasn't much to learn. And I was proven that, despite being extremely entertained watching the two juggernauts clash and elated with the outcome.

But when the Bulls blew a five-point lead in the fourth quarter and found themselves down by two with less than six minutes remaining, Thibs went with a small lineup of Watson, Kyle Korver, and Ronnie Brewer with Boozer and Taj as the bigs. The Bulls then went on an 11-4 run. Sure, the Heat went on an 8-0 run to go up by three, needing a LeBron James choke job and Watson three to go into OT.

But that 11-4 added the clock as a sixth defender for the Heat to face. We saw in the fourth quarter on Sunday to comeback for a lead in New York. We saw it when the Bulls with Boozer and Taj on the floor went on an 8-2 run to take a one-point lead in the third quarter of a lass to the Magic in early March, where they were losing by as much as 18 at one point.

The Boozer-Taj frountcourt has now moved from a mid-game lineup while re-incorporating starters to setting up the final minutes of games. Looking at the Eastern Conference makeup and the production of this unit, expect to see it as another crucial small ball counter-weapon Thibs will use in the playoffs.

* - Yes, despite listings on player pages, Deng is taller than Boozer. Look at any picture of the two next to each other. But Boozer's position is always closer to the rim, making him a PF-C, while Deng plays the smaller position when the two are on the floor together.