Early on in the season, the Philadelphia 76ers were considered the favorites to lock up the 3rd seed in the Eastern Conference. Through a combination of stifling defense and great coaching, the Sixers were beating teams by the widest margin in the league. In many ways, they're like the anti-Knicks--a very well coached team that is playing well above its skill level. Defense and coaching are what led to a Sixers win over the Bulls back in early February, in a game that led to some irrational ranting by Bulls fans. But since that game, the two teams have gone in different directions.

The Bulls enter Sunday's game with the best record in the NBA, and the Sixers recently went through a tough stretch that brought them to the brink of losing home-court advantage in the first round of the playoffs. The Bulls have been phenomenal coming out of the break, most recently posting 31 assists against the Cleveland Cavaliers. The Sixers, meanwhile, have regressed against tougher competition. They're still a good team, but once they started to play better teams, their flaws (such as lack of a big-time scorer) began to show. Here are the four keys to the game that will secure a Bulls victory.

The Sixers are the best team in the NBA in turnover differential, at an absurd -3.5. Part of that comes from Doug Collins' conservative approach, but the Sixers' primary ballhandlers have shown a tremendous amount of discipline this season. The Bulls have never been great at disrupting and creating turnovers, so they need to fight fire with fire and turn the ball over even less.

The last time these two teams played, the Bulls were out-rebounded 37-43, the lowest total they've posted this season. Neither team shot particularly well, but when your opponent has 10 more shots than you, you lose out on basic probability. The Bulls are the best rebounding team in the league, and they're longer than the Sixers. With Luol Deng playing this time around, I expect the Bulls to edge the Sixers here.

Force one Sixer to carry the offensive load

Louis Williams leads the Sixers in scoring with around 15 points a game. This tells us two things. One, the Sixers need a big time scorer in order to sustain their success into the playoffs and beyond. Two, they play great team basketball, leading the league in assist-to-turnover ratio. The Bulls need to quickly close out on shooters and clog the lanes better in order to shutdown what makes the Sixers so good. I expect Andre Iguodala or Williams to get their buckets, but a repeat of their previous matchup (5 players with 14 or more points) will be disappointing.

Live in the paint

The Sixers lead the league in defensive efficiency because they force their opponents to shoot the least-efficient shots from the floor, those long twos and contested threes. The Bulls are not a great shooting team, and yet players like Derrick Rose and Carlos Boozer use up a lot of by possessions by shooting those threes and long twos. Rose and Boozer are at their best when they play in the paint, and the Bulls' front office knew this when they brought in Rip Hamilton to spread the floor. The key to scoring points on this Sixer defense is to refuse to play by their schemes. Rose needs to get Boozer into a rhythm early in the game while maintaining offensive aggressiveness.

The Bulls need to win this game to develop the confidence and mental fortitude that are conduits to championships. This is a well coached, consistent team that can shut down opposing teams for long stretches, but the Bulls have the best player on the court. Rose needs to step it up and show the world that he doesn't need to play against a star point guard to have a good game. If he can't beat the Sixers, he certainly can't beat the Heat. Here's to not losing 4 in a row against Philadelphia.

Sorry for the somewhat boring preview, so here's an absurd trade proposal. 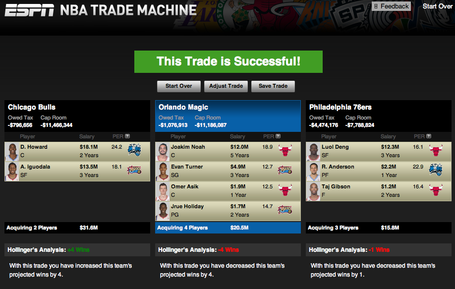 Talk smack on Liberty Ballers, Philly fans are the worst.