The Bulls are currently in the midst of a pretty interesting week involving a 9 game road trip, all-star game appearances, injury updates, Will Ferrell introductions, and now ... the Charlotte Bobcats (sarcasm).

Chicago is 5-2 on their current road trip and just broke a NBA record for winning 3 road games by 20+ points. Given the fact that Charlotte is 3-22 and is a -13.7 in point differential, there is probably a good chance that Thib's defensive team (which was featured on NBA's BIG promotion) could make this a 4th straight game of winning by 20+ points. The way that the Bulls have been handling sub .500 opponents, and not playing down to their levels makes me more confident in their performance tonight.

Another reason to be confident is due to Charlotte's injury situation. They will be missing Gerald Henderson (out 2-4 weeks), D.J. Augustin, and Corey Maggette is also day to day with an injury . Henderson was the leading scorer with 22 pts (and 9 rebs) in a 95-89 Bulls win on Jan 21st.

However, Reggie Williams and Derrick Brown have been playing well lately. Then there is always B.J. Mullens... 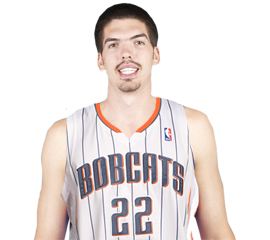 Matchups: There is really no point in going through the matchups because the Bulls have the advantage across the board. But here is the expected starting lineup for the Bobcats: Kemba Walker, Reggie Williams, Tyrus Thomas, Boris Diaw, Byron Mullens (or Diop).

As for the Bulls injury news it is certain that Richard Hamilton will still not be suiting up and may not even be with the team (he is attending to a personal matter). Also, Derrick Rose is still day-to-day and a blow-out win against the Bobcats may be what he needs in terms of more rest. Although, you never know with Thibodeau (wow, that should be Blogabulls new Tagline). Since Hamilton's absence, C.J. Watson and Kyle Korver have had great shooting performances which could lead to possible participation in the NBA 3-point shootout; where they would be seeing Luol Deng! (more on him after the jump)

Probably the biggest news of the week is that Luol Deng was chosen for his 1st NBA All-Star Game. Congratulations Luol. Yes, the same Luolz that some of us were ready to trade for a 2nd round draft pick two summers ago just to have the CAP room to possibly get Lebron James. Wow, I personally, am so glad that didn't happen. Although Luol may not have the greatest numbers this season he is the 2nd most important player on a team with the best record in the NBA (OKC lost last night to Sac). He also should be making the all-defensive team, but that is for a different discussion at the end of the season. So, Luol, here's to you and your Luhawk! 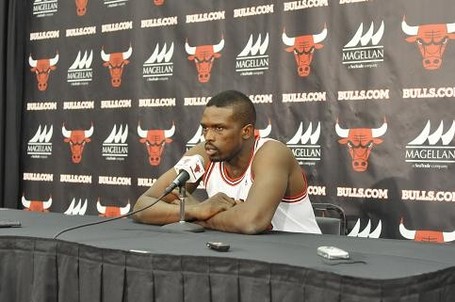 - Tyrus Thomas trade rumor - There apparently is a rumor floating around of a trade of Tyrus Thomas for Andray Blatche. Doesn't really affect us but just interesting that we still got a 1st round pick for Tyrus! Speaking of that, given their 3-22 record that draft pick is looking better and better!

- Reinsdorf has no interest in hosting an all-star game

- The Bulls only need 2 more wins for Thibs to be the head coach at the ASG!

Go Bulls, Enjoy the game, and lets get Derrick some rest!