Bulls at Houston Rockets game preview: The Return of the Thunder God

Share All sharing options for: Bulls at Houston Rockets game preview: The Return of the Thunder God

[Thanks to THEKILLERWHALE for today's game preview. We need some previewers the next couple of games so sign up! -yfbb]

Hey gang! The Bulls have laid a series of eggs lately and are looking to bounce back. Their opponent is the long-mediocre Houston Rockets who have finally acquired the pieces necessary to move forward and are now all on the all league-pass team (Below: The Houston Rockets after Jeremy's mom dropped them off at ComicCon this year which was really rad of her). They, too, are on a bit of a slide having lost their last three games and are probably looking to turn things around.

On to the matchups!

Ugh. I do not want to throw our players under the bus. I do not blame Hinrich. I blame the person who put him in this position. We have to support our players as the situation will not improve magically and we have to do the best with our current personnel. As such, I propose that we remove the point guard matchups from all future fanposts except when the Bulls play Detroit.

Kirk's PER is sitting at 9.12 and his true shooting percentage is at .363. Among starting point guards, that TS% puts Kirk in a league of his own (not in a good way). Combining those two stats, the only other starting point guard who is anywhere even close to this bad is Rodney Stuckey. As such, I propose counting the point guard match up as an automatic loss until such time as we play the Pistons. Come February, the point guard match up will be regarded as an automatic win.

That said, perhaps it is not so dire. Hinrich has done an excellent job at defending the passing lanes. He has also fed the ball to his teammates very well but this is not so helpful if he is not providing spacing with his shot. Okay, that's the best that I can do.

Jeremy Lin has come down to earth since the heyday of Linsanity and well-spaced, point-guard driven style. His numbers are fairly pedestrian with the Rockets, getting roughly 10 points per game while shooting 34%. My prediction is that he will eventually settle in among the leagues middle class for point guards which, while not as joyous as Linsanity, is certainly respectable and well worth 8 million a year.

This season's big acquisition for the Houston Rockets. Harden started off with a bang, throwing up consecutive 40 point games but has since settled down a bit to a respectable 24/4/4. He stank in the Utah game but was dealing with a bout of the flu. According to league sources he had it coming out of both ends. His 3-point shooting is sub-30% at this point but this will probably bounce back (although he probably had a lot more space to work with in OKC). Harden is a damn crafty ball-handler who can penetrate with the best in the league (we saw this when we played OKC but his finishing was off).

For the Bulls, we have Old-Man-Hamilton who, after seeing his minutes limited recently will probably be pissed off and looking to kick this bearded punk the hell off of his lawn (metaphorically speaking). Rip put up an efficient 7/10 against Portland but played Boozer-esque defense in 22 minutes of playing time. I read that his minutes were being limited and I am very interested in the ins-and-outs of this. Please elaborate in the thread. Does this mean that he is trade bait?

That said, Harden is young, top-shelf talent. I always thought that he was a bit soft, but he is easily the better player tonight.

This season, Chandler Parsons has put up 14ppg, 7 rebs with his 3pt% approaching 40%. Lu is pulling an 18/5 but his 3pt% is quite low. I have not watched much of Parsons but my suspicion is that his defense is nowhere near the level of the great Lu Deng's. I would prefer to see Lu getting his 3 point game together, since the Bulls offense is dieing for some shooting.

As an aside, if Parsons can keep this up, it is really hard to state how huge of a win this is for the Rockets. Parsons is signed to a 4-year contract that pays him less than a million a year. If you can lock down a league-average starter at a position for 4 years on a contract that cheap, that gives you incredible flexibility to build up the rest of the roster.

That said, Lu Deng will eat this kid alive. He has had 3 days off and had the taste of losing in his mouth the entire time.

I do not know much about Patterson but I know that he is probably the weakest of the Rocket's starters. He is averaging less than 8/5 in 24 minutes of play. Boozer is a well known bum-slayer so we should expect this kid to be left to die in a dark alleyway somewhere while Boozer contemplates his latest experiment with evil and recoils at the joy that he felt as he watched the life slowly drain...er, I mean we are going to win this matchup.

Okay, with these matchups in mind it looks like the Bulls should have an easy time tonight. While the Rockets have a few nice pieces they lack the cohesion of a great team and... (cue thunder booming) 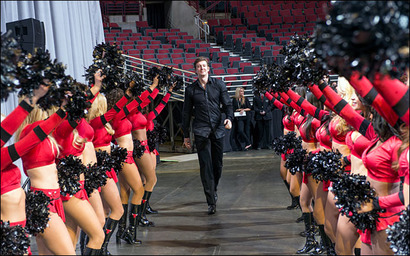 God that hurts to write. In a nasty bit of GMing, fat Elvis stole the great Turk from the Bulls. The Bulls put themselves in this position. That said, we must adjust to a reality where the only bit of Turkey we will be getting will be at Grandma's house this Thursday.

Omer is putting up a double double, playing his usual stellar defense (when he does not look gassed) and is, remarkably, shooting 62% from the line. He is not a liability! He is probably not creating too much offense but he is getting 10+ points in the usual way for offensively challenged big men.

Jo is having a monster season in his own right, putting up a 15/10 and being his usual unrelenting self on defense. This is only part of the picture as he regularly gets the most difficult defensive assignment and must play 40 minutes a night. It is hard to overstate just what an asset this guy is and I hope that he is a Bull for life.

That said, a part of me is going to die when I see these two going at it. They are 2 of the top-5 defensive centers in the league so it should be damn interesting. However, there is a reason why Jo was starting over Omer.

That said, here are a few pictures celebrating the insta-bull from Istanbul, backgammon partner and all around credit to the human race, Omer Asik.

Always a punching bag for the refs, Omer trys to sell his shock at an unfair foul call: 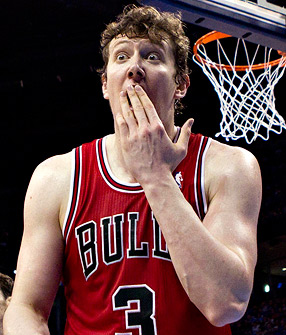 The foul was not overturned. In this photo, I cannot put my finger on why he is so damn weird looking next to a regular human. Maybe it's the clothes, although they are surprisingly well-fitting given his body type. 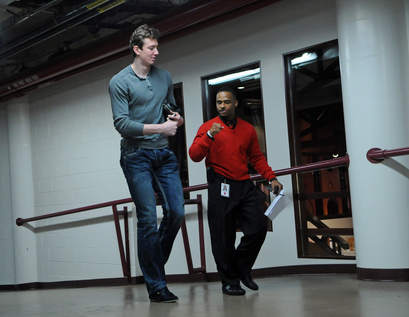 Lastly, here is an homage to our dear-departed bench mob. Ronnie is harassing Gasol while Omer is...well... 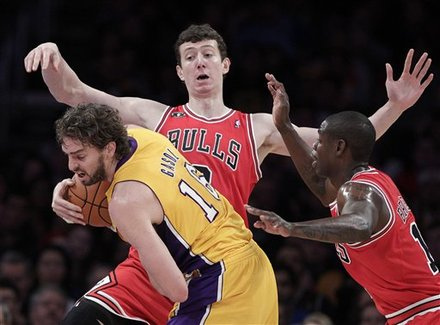 If anyone can find that image of Omer awkwardly holding a baby that someone posted in a game-thread last year, I would be pleased to see it in the thread. Also check out this article for a nice series of interview with Thibs and the Bull's players about Omer. 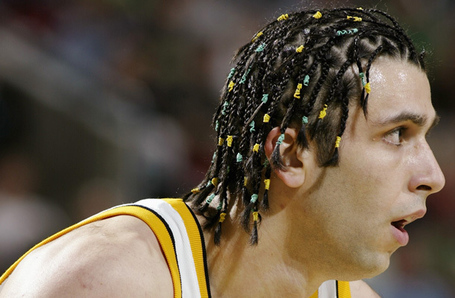 ...conversation over. What was thought to be the lone bright spot on this bench, one Taj Gibson, has not returned to form since signing his contract. I expect him to rediscover his game but, the fact is, he does not have the personnel around him to form an effective unit anymore. Unless we are playing the Cav's or Detroit, we should probably just leave this matchup out of the conversation in a manner similar to the point guard matchup.

The Rockets have some nice pieces on their bench. Marcus Morris is shaping up to be a damn good stretch-4, shooting 40% from 3 point land and putting up 10ppg in 22 minutes. Carlos Delfino is a known quantity. His shooting is a bit down this year but you would not kick him out of bed... in a basketball sense...er, let's move on. Cole Aldrich was always a very serviceable 4th big.

This is a lesser storyline, but McHale's on some kind of leave of absence. Even if this were not the case, the Bulls would have a huge advantage here (although some of Thibs substitutions have left me scratching my head lately).

The Bulls are playing some ugly ball this year but expect them to feast in these situations. The Rockets have some great pieces but they are currently in a sum-of-their-parts state and need time to come together as a team. Expect them to make a splash in the coming years (especially if they can upgrade at the 4), but they will be on the bad-side of .500 in the immediate future.

I will be at the game! Look for me in the last row. I will be the well-dressed, handsome one. Check out the Dream Shake for the Rockets preview and feel free to troll-away (for future trolling purposes, be sure to sign up for all SB-nation blogs as there is a 24 hour waiting period to dissuade trolls).