The NBA eliminated the center position from the All-Star Game ballot, which likely hurts Joakim Noah's chances of making the team.

The NBA announced what was probably a much-needed change in the All-Star Game voting yesterday, eliminating the position of center from the ballot. Now, rather than voting for two forwards and a center, fans will get to vote for three "frontcourt" players.

The so-called "Duncan Dilemma" was cited as a reason for the change, as Tim Duncan was often listed as a power forward despite being the Spurs' center. Another reason, and a pretty good one at that, is the fact that the lines between what constitutes a power forward and a center have become increasingly blurred with the small-ball revolution going around the league these days.

So how do these changes affect the Bulls' Joakim Noah, who I personally feel will have an All-Star caliber season this year.

With Dwight Howard out of the East, I'd have said that Noah would have had a damn good chance under the old rules of not only making the team, but starting as well. Yes, Andrew Bynum is now in the conference, but there's almost as good a chance that his knees blow up that he goes ham on everybody. Other names like Al Horford, Roy Hibbert, Brook Lopez , Tyson Chandler and Greg Monroe are also in the picture (maybe Nene Hilario as well, but meh), but I think a fast start for Noah and the Bulls would have gotten him a lot of love from the fans.

But now with this new rule in place, I think a healthy Bynum is the only one of those names I just mentioned who has a chance to start. LeBron James and Carmelo Anthony will likely hold down two of the "frontcourt" spots, and there's a pretty good chance that third one ends up going to Chris Bosh or Kevin Garnett.

This leaves the coaches vote as the only chance for Noah. With Bynum possibly pushed back to the bench and the new emphasis on going small, how many more traditional centers will be taken? Obviously, Noah and/or these other centers could perform so well that their achievements simply can't be ignored. For example, if Jo throws up 16 and 13 like he did at the start of 2010-11, I would think it would be pretty hard to leave him off. But if the stats don't really jump off the page, I envision some snubs.

For some reference, here's the stats of these centers from their last relatively healthy season (via Basketball Reference): 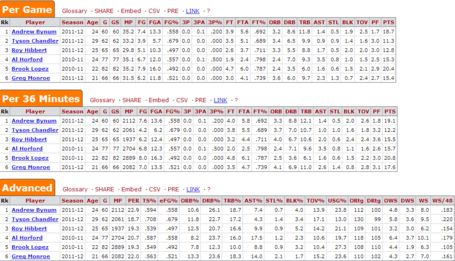 Needless to say, Noah does have some work to do if he wants to be even considered ahead of these other guys. Situations can certainly change with injuries and stuff, but if there's somehow perfect health, Noah pretty much has to make the leap back to those early 2010-11 numbers to have a chance. It will be a tall order, but I think he's got it in him.