Is Carlos Boozer due for a more noticeable decline this year?

Share All sharing options for: Is Carlos Boozer due for a more noticeable decline this year?

If you've been paying attention this training camp (and I don't blame you if you haven't), I'm pretty worried about Carlos Boozer. Not just in the usual, obvious, "he stinks on defense, and he'll disappear in the playoffs" kind of worried, but that he won't even have regular-season-success on offense.

Some of this feeling is simply from extrapolating a decline. Boozer will turn 31 a month into this season, and that's just not typically a time when a player will get better. And you can see it specifically in his athleticism and jumping ability. Of course, he's never been much of a leaper, but it's all relative: being worse at it will matter. And this is the second straight season he's come in lighter than usual, so while it should help compensate it may be at the expense of his strength, an asset of his.

Near the end of last season I noted that Boozer was staying effective even as his game was dramatically drifting away from the basket: his FTAs were nearly halved from the previous season, his shots attempts at the rim dropped, and he compensated by taking more of his shots from farther distances. While usually not a recipe for success, he managed to not only have a very good mark from long-range but a nearly league-leading percentage from 3-9 feet.

I find some of that flukey, or at least tough to figure as sustainable. The long-range shots may have a better chance at being consistent given his track record, but those can vary season-to-season. Being that good at 3-9 feet seems even less sustainable: you can see the maddening flip-shots he takes from close range, the mentioned decline in agility. Maybe he really just got good at it. And it was under 2 attempts a game last year. But it's just something that makes me feel icky.

So far, Boozer's preseason has been pretty bad. Under 36% from the floor, and only 4 FTAs in a combined 60 minutes. If you look at his shot charts (or as I call them in this case, "sharts") he's 3-14 on jumpers. I've seen him effectively sneak into space underneath for a catch and quick layup (especially in the Cleveland game) but he certainly hasn't become a post-up option for the Bulls to play 'inside-out' like Thibs hopes for.

The Bulls are counting on Boozer to produce in Rose's absense, and I just don't think he has it in him. I think he's not only getting worse, but that not having Rose to draw the defense's attention will cause him more harm to his overall game than getting more shot attempts would. Kirk Hinrich may be a better (technically) and willing pick-and-roll player for him than Rose, but it's not Kirk's strength either, and he's nowhere near what Deron Williams could do in Utah. Boozer doesn't look to be able to finish as well anymore anyway.

This is, of course, speculative and pessimistic. Boozer was fine last season before bottoming-out in the playoffs, and it's only been 3 exhibition contests which is a pretty weak sample to either have one's mind put at ease or in this case, the opposite. And not all the evidence is bad: as a silver lining to Rose's nightmare of last season is that the Bulls did have a big sample last season of Boozer playing without him, and to my surprise Booz actually fared better. 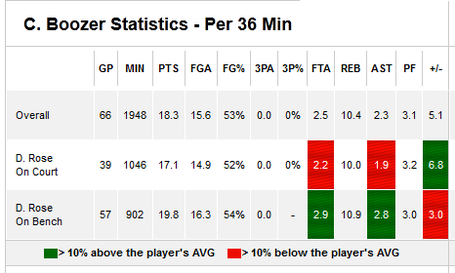 Boozer was not only more affective with Rose on the bench, but was scoring inside more. Not only at the line but a crazy-high 57% (with more attempts/minute) in the space of the court defined as the paint but not the restricted area.

Boozer adjusted last season to keep his game reasonably efficient though he stopped scoring inside and drawing fouls. Without Rose, he'll have another major challenge in trying to do so in even less space. But as you can see above at least he's managed to do it before. I'm just really skeptical he can do it again.