There's a big black cloud hanging over this game, and like Global Warming and my credit card debt, it's all LeBron's fault.

Three seasons ago, as the Bulls were putting up a doomed but valiant fight against Vinny Del Negro's concept of a rotation in the playoffs, I would have guessed that any Bulls-Celtics matchup over the next half-decade would be a scrappy battle for equal parts pride and Eastern Conference dominance. To listen to radio and television, though, everything that happens to either of these teams anymore matters only as it relates to the Heat. The "almost as good as Miami" vibe is everywhere - you can even see it in the matchups. Luol Deng vs. Paul Pierce: the battle to back up LeBron in the All-Star Game. Derrick Rose vs. Rajon Rondo: which young floor general can drag his frontcourt to the ECF (where, of course, they will lose to Miami)?

Enough already. Thank God Shamgod we're finally at the end of the Most Depressing Week Ever for a team with a .833 winning percentage. At least Celtics fans have something legitimate to complain about. I'm tired of wondering if we have "enough superstars", and of everyone complaining about how bad Noah sucks (also: how bad Noah sucks) [do you mean Boozer in that second one? -ed.]. It's January. It's also Friday the 13th, in 2012, in a season that almost never happened, and the Bulls are playing the Celtics. The stars are aligned for some good old-fashioned bush league basketball. Let's get it on!

Matchups coming, but first we go to Craig Sager, standing by with Tom Thibodeau: 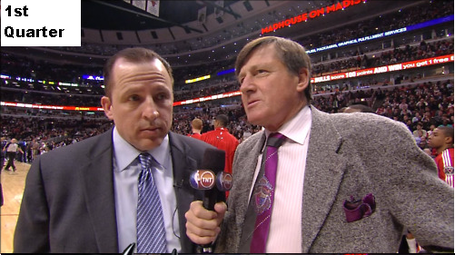 Sager: "Coach, do you anticipate any additions to the roster?"

Thibs: "We've got a couple of guys on the radar. Our staff is flagging parking violations and elementary school discipline records as we speak."

It's what BaB lives for: the reigning MVP vs. the fugitive of MIB. Rondo's putting up 15.5 pts and 10 assists so far this season, and with a possibly-hobbled Rose, this might not be the one-sided beat down we'd all love. But while Rondo's shooting 70% at the rim, he's shooting under 40% everywhere else, and his usual 58% from the FT line - so in other words, go to work, Omer.

No Rip again, so this won't be the matchup of crafty veterans I, for one, was looking forward to. It will be fun, however, to watch the ma with possibly the most perfect jumper in NBA history trade shots with Ronnie Brewer and his crooked-armed abomination. Ray is the only one of Boston's big 3 playing up to snuff right now, and he's been a lone bright spot in some bad games (the Indiana game in particular). Unless Ronnie plays out of his mind and Ray gets in a (Neil-induced) funk, the Celtics are going to take this one.

Let's briefly go back to Craig Sager, who's on the sideline with Coach Thibs: 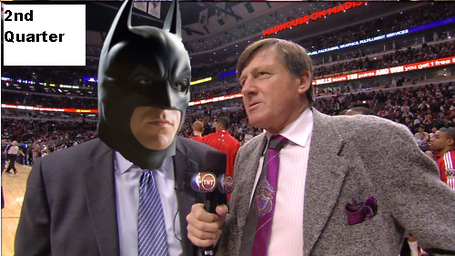 Sager: "Coach, how does it feel to be back in Boston?"

Thibs: "This city is full of people ready to believe in good...defense."

Sager: "How would you characterize your overall approach?"

Thibs: "I'm whatever Chicago needs me to be."

If both of these guys look exhausted at the end of the night, it's not because they've had a similar workload. Pierce has yet to get into game shape after coming back late from injury. For that reason it's an obvious edge to the Bulls, though it might have been anyway. Although Pierce's pull-up haunts my dreams (as does Lu's ball handling), Deng can wear a lot of hats, and if Pierce isn't scoring he isn't the better player.

Man, it's gonna be loud in the post tonight.

Noah: "You are absolutely not getting a Christmas present from me, you meanie!"

..I don't know. At this point, how either of these guys plays on any given night is up in the air. Not literally though; they have the combined vertical of Mike Bibby.

On the sidelines, here's Craig Sager with Tom Waits Thibodeau: 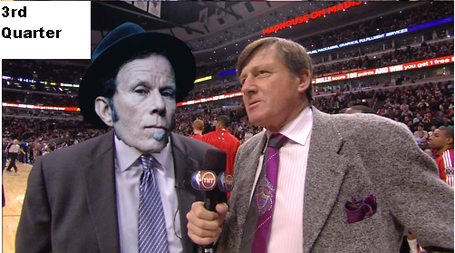 Sager: "Coach, what did you tell your guys at halftime?"

Sager: "My mother had her larynx removed and she is at least ten times as coherent as you."

Here's the case for Noah: he's a hustle/intensity guy; he once stole the ball from Pierce and gangled his way down the court for a fast break dunk; Boston fans hate him, and right now Chicago fans aren't too keen on him either; the media is on his ass. If you believe in the guy, all these things add up to him killing himself to have a statement game. I don't know if he's got it in him, but I know the other guy doesn't, so edge Bulls.

No really, though, Pietrus looked good Wednesday, and Dooling's been competent. Bass was a great pickup, he's got a nice jumper and he's not Big Baby, which makes them marginally less obnoxious as a team. Budding folk hero Greg Stiemsma (or something) would appear to be no match for budding real hero Omer Asik.So, final analysis:

We go once more to Craig Sager, standing by on the sidelines with the increasingly incomprehensible Tom Thibodeau: 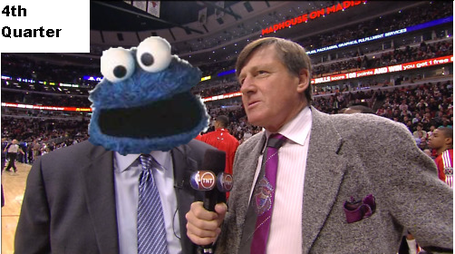 Sager: "Coach, what adjustments do you need to make down the stretch?"

Sager: "You should probably stop eating what Noah hands you."

Game is at 7:00 on CSN and ESPN nationally. Go here: CelticsBlog if you must, but don't pick up any trolls on the way back.