Bulls vs. Pistons - Boozer vs. Noah and how to still worry after blowout victories

Share All sharing options for: Bulls vs. Pistons - Boozer vs. Noah and how to still worry after blowout victories

First, read Alex's recap if you haven't already. He mentioned that while Carlos Boozer had a great offensive game last night, the points did mostly come on jumpshots, and to take that further Bulls By the Horns does a good job conveying his conflicted feelings:

Boozer's stats aren’t quite what they were in his Utah days — 14.9 PPG, 8.3 RPG, 1.0 APG — but he’s shooting 52 percent from the field, has a Player Efficiency Rating of 20.62, and has been a reasonably sound second scoring option when needed.

Like last night against the Pistons, when he had 23 points on 9-for-13 shooting to go with 8 rebounds, 2 assists and a blocked shot.

The one troubling difference in Boozer’s game this season is where his shots are coming from. According to Hoopdata, from 2007 to 2011, Carlos averaged between 7.4 and 6.0 shot attempts at the rim. This season, that number is down to 3.1. Meanwhile, his attempts from 16-23 feet have jumped from 3.0 last season to 5.2 this season.

Sure enough, last night he got two attempts at the rim while taking nine from 16-23 feet. So, in essence, he is transforming into a 260-pound jump shooter.

This troubles me. Boozer is playing well, sure, but he’s also supposed to be Chicago’s primary (read that: only) inside scoring presence. Only he’s scoring from outside more so than the inside.

The situation bears watching, because the Bulls aren’t going to overcome the Heat with Boozer launching long two-pointers.

It's even more striking visually: 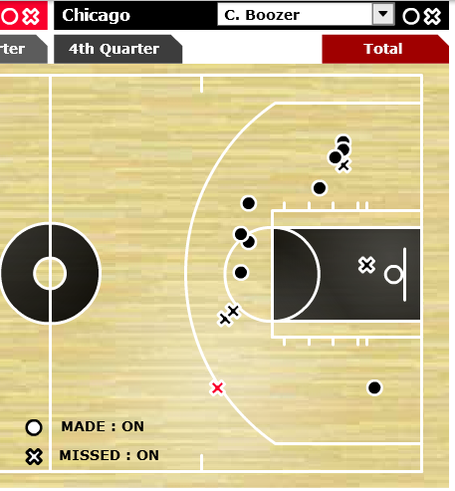 I know, that poor Boozer just can't win. His defense will always be an eyesore and he's signed to be the second option, so: if he's not great offensively it's a problem, and even when he is great he can be criticized for not doing so in a better way.

But the problem isn't so much how Boozer's doing individually as it's affecting the team as a whole. If Carlos Boozer is primarily starting in the high post and venturing out even further to take shots, it mitigates how Joakim Noah can use his strengths in that spot on the floor.

And it's perhaps one of the many reasons Noah has looked awful at times this season. I'd show his shot chart from last night, but it doesn't exist. Even the usual praise he gets for his effort and energy is tempered when you see him so often winded early in his stints. (That in particular is something I could see cropping up in a KC Johnson mailbag in May, along the lines of 'Oh by the way, Joakim Noah showed up out of shape this season'.)

Jo has always been more of a 'gamer' than practice player, so maybe this is his training camp and he'll improve. And while maybe the Boozer-Noah frontcourt doesn't look like it maximizes the strengths of either, that doesn't mean it can't be effective for the team: they still murder opponents on the boards and it's not as if Taj or Asik are ideal offensive complements either due to their own limitations. Per usual, the best short-term strategy is just hoping Noah and Boozer figure it out, and I'm starting to think it's Noah who'll be the one who has to (or maybe is just more likely to?) change: he doesn't have to live in the low post, but can be better diving to the rim without getting stripped, for starters (pun).

Other notes from what, I should remember, was a blowout victory: