Share All sharing options for: More Game Two hype: This Bulls-Heat series is a big deal

Gamethread in a couple hours, but something to chew on until then:

We know this series has been a ratings bonanza so far. But here's some more evidence of just how nutty the matchup has made the buying public. Friends of the program TiqIQ, a service that tracks ticket prices over secondary markets, forwarded over this graphic to show just how big this has gotten: 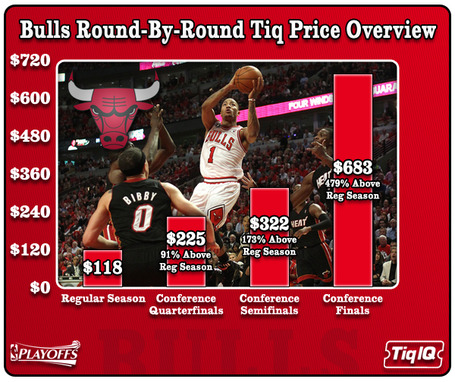 There's a bunch more at the TiqIQ page hosted at SBNation (see Reinsdorf? You're not the only one cashing in!), including ways to purchase tickets of your own.

I think this conclusively says that those at tonight's game, though they may not clap as much as you'd like sometimes, are clearly more invested (and therefore better) fans than you.

(I'm still in the air about acquiring tickets to this series, myself. I guess if the Bulls sweep it won't matter)