Q&A with Fear the Sword

Share All sharing options for: Q&A with Fear the Sword

I recently corresponded with John Bena over at SBNation brother site Fear The Sword, where he cov 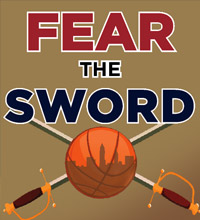 Cavaliers. Keep in mind the answers were sent to me before game one:

BaB: Way back in November the Bulls beat the Cavs in Cleveland and I was especially surprised at how seemingly easy it was to discourage LeBron and make him rely on jumpshots. Frankly, he coasted. Does that happen often, and could it again in a playoff situation? Not that even a coasting LeBron couldn't still beat the Bulls, but it could make a game or two far more interesting.

(Answers start after the jump...)

FtS: Ya know, it has been fun watching LeBron go through his career progression. There was 2007, when the Cavaliers surprised everyone and got to the Finals. 2008, when LeBron took some nights off, and the Cavaliers struggled to get to 50 wins, with the team playing down to its competition. Then there was last season. LeBron was on a mission, personally, and for the Cavs as a whole. You could tell he wanted to win every game he played. He played hard every minute - every night. Unfortunately, LeBron played a tone of basketball, from the playoffs in 08, to the Olympics in China, to the Eastern Conference Finals last season. It caught up with him and he looked tired at the end of the Orlando series.

That leads us to this season. I'm not saying LeBron took nights off, or didn't want to win every time he took the floor, but I got the sense that both LeBron, and his teammates, understood that a win in November means little in April and May. The Cavaliers wanted to win the Central, they wanted to get the best record in the East, and the NBA. But they also wanted to make sure they peaked - physically and emotionally - at the right time. I think that is what you are seeing. LeBron is ready to go and seems more focused that I've ever seen him heading into the Playoffs. He knows where his legacy lies, and he knows there are no excuses this time around.

BaB: What's your assessment on the great Shaq experiment as the season wore on, and how much difficulty do you think there will be re-integrating him in the rotation this series?

FtS: I think the big question for me was always whether or not Shaq would accept his role. He did, and prior to him getting hurt he was playing great basketball. O'Neal knows about his legacy too, and to win titles with three of the greatest players in the game - Kobe, D-Wade and possibly LeBron - would go a long way towards cementing his place in NBA history.

As for getting him back in the swing of things, I don't think it will be a huge deal. Shaq will be used to bang bodies for 18-20 minutes a night. With Zydrunas Ilgauskas back in the rotation I feel good that the Cavaliers don't need Shaq to score - just to control the defensive glass. Especially against the Bulls who do a great job rebounding the basketball.

BaB: What do you foresee as the Cavs game-plan to slow down Derrick Rose? How adept is Mike Brown in altering his defenses (and does he have the players to do so) to specifically attack a single player?

FtS: The Cavaliers ability to stop Rose is the difference between this series ending quickly, or going 6 or 7 games. I really believe that. I think the Cavs will do to Rose what they do to D-Wade. When Rose brings the ball across the time-line, they will immediately rush him with a combination of Mo Williams, Delonte West, Anthony Parker or even LeBron. The goal being to get the ball out of Rose's hands and force someone else to initiate the offense. The Bulls can counter this however by having Rose and Kirk Hinrich in the game at the same time. If Hinrich stays hot shooting the basketball, it will force the Cavs to play more straight up against Rose.

In the end, Rose will likely get his points. It's the other guys - Hinrich, Noah, Brad Miller - that the Cavaliers have to keep in check. In a lot of ways, the Bulls are like the Cavaliers from a few years ago. Contain LeBron and force someone else to beat you. That is what the Cavaliers need to do with Rose. There is little doubt, however, that Rose has a big advantage over Williams.

Mo will need to be aggressive on the offensive end and try to negate some of Rose's offensive production.

BaB: What do you see as the Cavs matchup weaknesses in this series?

FtS: The obvious one is Rose v. Williams. Rose will likely be able to get to the rim at will. Mo will need to counter with his offense. A matchup that will likely decide a couple of the games is Noah v. Varejao. Both guys play a similar style and provide many of the same things to their teams. Noah is the better offensive player, but the guy that makes the hustle plays more often for their team each game will likely be playing for the winning team that night.

Brad Miller could be a key as well. If he gets his outside game going - forcing Shaq to come out and guard him - it could open up the lane for the Bulls to get to the basket.

BaB: In having the full team back together, from Shaq to Big Z to Jamison, what do you want to see as a Cavs fan in this series that would make you confident as you (or 'should you') advance?

FtS: I want to see passion and a sense of urgency right from the start in Game 1. The Cavaliers were burned in the playoffs last season by allowing teams to come back after getting a lead. It happened at times this season as well. The Cavaliers - LeBron included - have a tendency to take bad shots if they have a lead, instead of going for the kill. That's what I want to see.

If the Bulls are going to win a game, or two, or four, it needs to be because the Bulls played better - not because they played harder. Obviously the Cavs are huge favorites, but the Cavs know - from what the Bulls did to the Celtics last season, and from two Chicago wins this season - that it is going to be a dogfight.

I guess we did see that in game one from the Cavs, didn't we? Make sure to check out Fear the Sword all series.