And anyone who says anything otherwise is an idiot.

In a game billed as the Clash of the Flips -- and if you think the Murray/Saunders thing wasn't a total mindfuck for Neil Funk, you are sadly mistaken -- the maddening, rudderless Bulls made an unwelcome reappearance in the third quarter of Monday's 101-95 loss to the Washington Wizards.

What a difference a day makes.

In the first game after their most impressive performance of the season, the Bulls went from looking like a team destined to rise to the fifth seed in the East to a group that will shit themselves right out of a playoff spot.

Which is why you don't make judgments based on one game. The Bulls are now 2-1 since the trade deadline, but after such a stellar effort Saturday against the 76ers, who the hell were those guys in the Chicago uniforms against the Wizards?

They were a flawed team, which is exactly what these Bulls have always been. And that's not going to change with the acquisition of guys like Flip Murray and Hakim Warrick. A few observations:

1. With Tyrus Thomas gone and Joakim Noah limited, the Bulls just could not match up with Washington's athletic frontcourt.

While they had all kinds of trouble dealing with Wiz forwards Al Thornton and James Singleton -- Wait, did I really just type that? -- the Bulls had absolutely no answer for Andray Blatche, the 6-11, 23-year-old power forward who's finally getting an extensive look with Antawn Jamison now on the Cavs.

Despite the horrendous first-name letter sequence, Blatche has always played well when given the opportunity, and he's really taking advantage of the increased playing time. Counting Monday's 8-for-13 performance, he's now 41-for-69 (59.4%) from the field in the four games since Jamison's departure, averaging 25 points and a touch over 10 rebounds while the Wizards have gone 3-1.

As Blatche had his way with the Bulls for 25 and 11, I kept thinking, What ever happened to that long, quick power forward we used to have? He might've matched up well against him.. But it wasn't just Tyrus' absence that was the problem. The Wizards bigs were just far quicker, which is one of the downsides of the Luol Deng-Taj Gibson-Brad Miller trio.

And it's also part of why you saw 6-foot-3 Flip Murray getting a lot of minutes at small forward, with Deng sliding over and playing the 4. The other part? See 3A and his inability to recognize what is working for his team on that particularly day, or adjust in any way.

2. Despite the loss, the new guys actually continued to make solid contributions.

Murray and Hakim Warrick were the Bulls 2nd- and 3rd-leading scorers with 16 and 12 points, respectively. Both shot over 50%, and Warrick somehow continued to do his best Tyrus impression by blocking two more shots.*

* Not that the rejections will continue, as I'll take 350+ games of career data over the past two, but they've clearly been the karmic result of people like me Chicken-Littling the Bulls' loss of blocks..

Murray, meanwhile, made the Bulls' biggest shot, a 3-pointer that brought them within 96-95 (after they had trailed by 13 with a little over five minutes to play) with 1:54 remaining. Unfortunately it would be their final points. Because:

As a 10-point lead turned into a 5-point deficit in the first eight minutes of the third quarter, Del Negro refused to do anything until the momentum had shifted completely. The following is an actual sequence of Bulls' possessions in the third:

** Even this, the one shot in there that actually seems good, wasn't, as Deng drove into a triple team and threw up a two-footer from two yards away as he crashed into a positionally-established JaVale McGee.

In that horrendous 10-possession stretch -- let me highlight the three travelings in a row, in case you missed that -- Vinny did not make even one substitution, nor did he call a single timeout. Not that the timeout would've helped, because as he proved in the fourth quarter, he still hasn't come up with one goddamn decent play.

After calling a 20 with a minute to go trailing 100-95, the Bulls ran no play whatsoever. Instead, all five guys stood around the perimeter, and Deng and Hinrich each considered shooting before swinging it around to Miller for a missed 3. Actually, it wouldn't surprise me if that was exactly how Vinny drew it up.

Then following a full timeout still down five with 26 seconds left, the Bulls took 12 seconds before getting a shot off, a pretty good look from Murray in the corner. But it was like they thought they had 26 minutes. How can these guys take so long when they're down that much with that little time remaining? Vinny should've just had Jannero Pargo in there, because for once his penchant for shooting contested 27-footers off the dribble with 19 seconds left on the shot clock would've really come in handy..

B. Kirk Hinrich somehow became incapable of making 53.2% of his shots, as he had done over the previous four games.

I never would have guessed that Hinrich would suddenly cool off. I mean, who could've predicted that a terrible shooter would shoot terribly?

And Hinrich is a terrible shooter, of that there can be no argument. Now granted, his form is picture-perfect: The ball looks great coming out of his hand, with nice rotation and textbook follow through. Everything is exquisite but the end result -- the things just do not go in. Hinrich has a .414 lifetime field goal percentage, has never hit as many as 45% of his shots in a season, and has only twice shot over 42%. I know it screws up the narrative, but HInrich had not been shooting well recently because of improved chemistry/spacing/ball-sharing the trades brought on; rather he was just a lousy marksman enjoying a hot streak. Which meant he was due for a regression to the mean -- in this case 2-for-7 (although he was 2-for-3 on 3s). 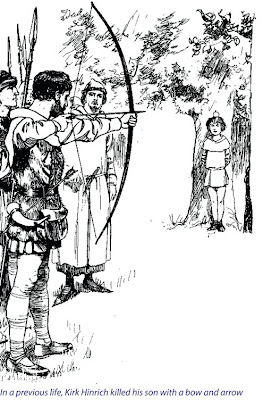 While I still think Hinrich is ideally suited to be a (ridiculously overcompensated) third guard, I am warming to him a bit as a 2, something I originally couldn't stand. Sure, the Bulls could do better, but when you have a shoot-first point guard -- and that's what Derrick Rose is (while he's not in the Monta Ellis, I'm-just-gonna-get-mine category, he ain't Jason Kidd either) -- it's good to have someone that's a ballsharer in the backcourt with him. Plus with Rose's D still, um... a work-in-progress, that makes Hinrich's contributions on that end especially valuable.

Now if only he could shoot like Ben Gordon.

4. Neil Funk was intentionally sharting on my ringing endorsement in my previous post.

"And there's going to be a timeout by Vinny Del Negro as the Bulls stop play as the Wizards go on a run to open the third and get to within four after trailing by 17."

The Bulls biggest lead was 12, at 50-38 and 52-40. I have no idea where those extra five points came from; perhaps Bulls guard Flip Saunders scored them.

In Funk's defense, his performance was much better than the team's. And he did later correct the mistake. Of course, that came right after he called Murray 'Flip Saunders' which, incidentally, he also corrected.

It just wasn't a particularly good night for anyone associated with the new-look Chicago Bulls.