According to the crew at Bulls Post Game Live, after but one game -- Friday's 100-94 win over Minnesota -- the answer is a resounding yes, followed by several exclamation points. Take it away, Mark and Kendall:

Schanowski: Warrick got big-time minutes backing up at both forward positions. He played 30 minutes, he had 10 points, 9 rebounds. He was very active. I thought he was very effective tonight.

Active? The shots and rebounds (six offensive) would indicate yes. But very effective? Really? He only scored 10 points on 13 shots, which is horribly inefficient. He didn't get to the free-throw line, had only one assist (against two turnovers) and did not record a steal or a blocked shot. I wouldn't even call that moderately effective. 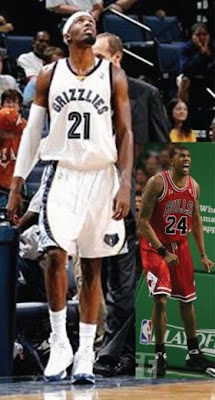 I'm going to mention here that I do actually like Warrick. But this wasn't one of his better games. I hope.

Gill: I liked what I saw. You know he was in control, not wild or anything like that--

I think we can all see where this is going...

Schanowski: I said it. (laughs)

Gill: He ran the break, rebounded effectively, did all of the things that we were hoping that Tyrus would do consistently. Now hopefully, he can continue to do this, because it's only going to be a plus for the Bulls.

Gee, Kendall, all of the things I hoped Tyrus would do included blocking a few shots and getting some steals. Do you know how many games Tyrus has had all season like Warrick's -- by that I mean with zero blocks and zero steals? Zero. ZERO!

Being a defensive game changer, that's kinda what I wanted Tyrus to do consistently. And say what you will about his occasionally disinterested play or periodic crazy shot and/or drive, but he did deliver on that end.

Schanowski: You know, I think his basketball IQ is a lot higher than Tyrus Thomas'. He knows when to cut to the basket, he seemed to really pick up what the Bulls wanted to do, almost, in his first game.

I suppose knowing when to step into a passing lane or timing your rotation to get a weakside block are not sound basketball plays. By the way, none of us ever saw Tyrus cut to the basket and throw down a vicious dunk. I wish we had. 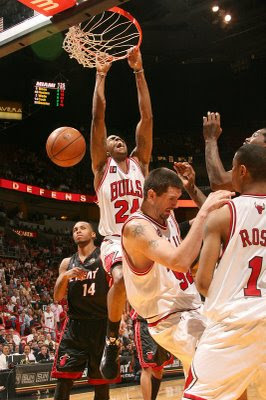 A figment of our collective imagination

Oh Jesus. There you have it. Even the Bulls announcers love their veterans.*

* For the record, this is Warrick's fifth season and Tyrus' fourth.

So anyway, I decided to look at every time Tyrus had played at least 30 minutes in a game this season, to compare to Warrick's production tonight:

The game on 12/29 is the only one where you could even make a case that Tyrus was less effective, as he scored 8 points on 2-10 shooting with 5 turnovers. But keep in mind that was only two fewer points than Warrick (on three fewer shots), he grabbed six more rebounds, dished out two more assists, got a steal, and blocked three shots. At worst that one's a push.

And yes, I understand there's some selection bias here -- that is, Tyrus played well so he "earned" a lot of minutes -- but keep in mind that Warrick logged 30 minutes tonight without having a very productive game.

There are, admittedly, some godawful lines in there, especially the four-point games on 1/8 and 1/15. But both his seven-point games were sneakily efficient: He took just five/six shots, and in one contest he had six steals, and the other six blocks. As for 10/30, while the free-throw percentage looks ugly, he did manage to get to the line all those times and scored the same amount of points as Warrick while attempting about half as many field goals. He did have one fewer rebound, but also turned the ball over one less time. Plus he had three steals.

So that's 13 games total. Warrick's numbers Friday were clearly superior to only two of them. Then there are four which I'd give to Tyrus but are at least semi-close. For the sake of argument, let's split them evenly. That still means that, when playing around the same number of minutes, Tyrus out-produced Warrick's Friday benchmarks roughly 70% of the time. Not that you would know that from listening to the Bulls' mouthpieces.

I want to be clear that I'm not using these numbers to try to prove that Tyrus is the better player, but rather to point out that the post-game Warrick-slurping/Tyrus-bashing was totally unwarranted. I understand it's only been one game, and given the woefully inadequate sample size I wouldn't draw any conclusions just yet. I believe that Tyrus is (and will prove to be) the better player. But for Schanowski and Gill to use the one game -- which wasn't even a particularly good showing -- as proof the Bulls got an upgrade is completely ludicrous.

Besides, if they're going to do something so bat-shit crazy, there was one other game they should've taken a look at: In his Bobcats debut, Tyrus shot a woeful 3-for-9. But because he got to the line four times (making three), he scored nine points. Oh, and he also added 12 rebounds and six (6!) blocks, all in 25 minutes.