With KG out, it can be Tyrus and Noah's time

By your friendly BullsBlogger@BullsBlogger Updated Apr 17, 2009, 8:36am CDT

Share All sharing options for: With KG out, it can be Tyrus and Noah's time 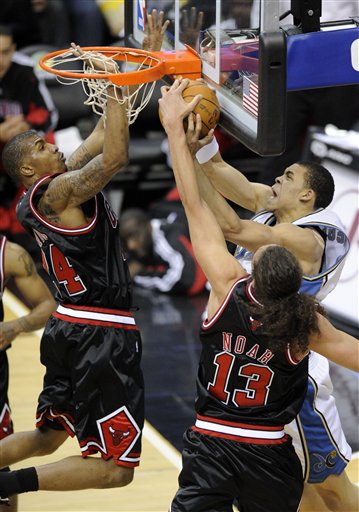 I normally try to restrain myself from believing such silliness, but I did believe a major reason the Celtics were a bad matchup for the Bulls was because Tyrus Thomas and Joakim Noah would wilt against the Celtics frontcourt. Mostly just by being physically overwhelmed, but also for reasons like: getting caught up in the dirty veteran tricks they employ. And the responsibility of trying not to foul a driving Paul Pierce or Rajon Rondo. And the intimidation by braying jackass Kevin Garnett not only getting himself amped up but filling lackeys like Kendrick Perkins and Leon Powe with confidence.

The new Celtics starting frontcourt is still pretty good. Powe is actually fairly comperable to the 2009 KG offensively. Both he and Perkins are strong as hell compared to the slighter (if quicker) Thomas and Noah. They may be missing Garnett defensively but they're disciplined, active, and play within the team scheme.

But while the dropoff from KG to Powe may not be as drastic as one would think, what I really think hurts the C's is the dropoff in their frontcourt reserves. Where Powe would be is now Glen Davis and Mikki Moore, and not all role players are created equal. Davis and Moore are simply bad NBA rotation players.

And as a group, their tough big brother is gone. Maybe some of that championship confidence is too. Yet Tyrus and Noah have their burly protector in Brad Miller, who is not only far better than what the C's can bring off the bench, he's also able to hold his own in the paint if Noah and Tyrus are being beat up physically. And he doesn't take, um, 'guff', without giving it back.

So while we've seen in the past where Thomas and Noah are completely thrown off their games against Garnett, this series can provide a chance for them to finally give it to the Celtics. For Noah to crash the offensive glass instead of picking up fouls. For Thomas to force the Celtics to foul him instead of settling for a jumper while Tom Thibodeau grins.

Both have made strides this season, though it wasn't exactly a breakout campaign for either, and questions remain in terms of how they can handle themselves against the elite teams. But Noah's certainly gotten stronger (literally, even) after a bad offseason and start to the year, and Thomas keeps showing more and more reasons to even consider not trading him for Amare Stoudemire, which is more than can be said the season prior. Thomas in particular can really raise his status with a great playoff performance.

Not that we haven't seen flashes of that before. But that brings me to a major potential obstacle holding these guys back: the coach. I remember feeling heartbroken (or pissed, whatever) in 2007 when Scott Skiles abandonded Thomas in the Pistons series for 'playoff-tested' Nocioni. Tyrus had earned that rotation spot and it was taken from him just because the other guy was older and more experienced. Will the same happen with either him or Noah when it comes to Brad Miller? Tim Thomas?

Luckily this roster has a shallow roster so Noah and Tyrus will play. But I'm hoping it's a lot, and in 4th quarters. With KG out, these guys have a great chance to do damage. And they've earned the opportunity to make it happen, whether they have little playoff experience or not.