I thought BDL's Kelly Dwyer would pile on the same target that a lot of people in the game thread were: the fans, for booing (yet again) a Bulls victory because they failed to score 100 points and get a free big mac.

That's a pretty tired subject: of course it's stupid to cheer/boo for a sandwich that not only is a fraction of what is paid for Bulls tickets, but you can get for free regardless (just use the card anyway, they will not be checking Bulls box scores).

Now, this goes on in just about every other arena, but because the United Center is so typically full of fans that are there on hand-me-down tickets (tickets bought by corporations, then handed down to clients or employees, then passed on again), the din following Chicago's failure or accomplishment in securing those 100 points is louder in Chicago than any other arena in the NBA. I know. I watch the games. Even Toronto, an expansion team that isn't yet 15 years old, passed the Bulls years ago in terms of tact.

Maybe Schanwald thinks it's OK for the players that he's charged with promoting are being booed every time (every ... single ... time) they get stuck at 98 or 99 points as the final seconds tick off. Doesn't matter if it's a blowout, close game, or blowout loss. The team gets booed by the majority of the fans left in the building, it's obvious on the TV and in person, and the loudest and most organic cheer of the night comes when the team tops 100 points. Not when Ben Gordon hits a corner three to seal it at 92-79 with two minutes to go.

Now that stinks. And it's been going on for years. And Schanwald, seemingly, doesn't care. And he doesn't seem like the type to care, either. He's the guy that pipes in ear-splittingly loud, incredibly inappropriate (as if there is ever an appropriate time for Bon Jovi) rock music to close out a touching and thoughtful ceremony to honor Johnny "Red" Kerr. He's the guy that changes up Chicago's intro music (the otherwise laughable Alan Parsons Project) for a dated 2007 remix because ... well, just because. He's the guy that has to protect his phony-baloney job by tweaking and tweaking and adding and changing.

He is, in effect, just as bad as someone like Jerry Krause. Out to prove that it was the organization, and not Michael Jordan, that kept those seats filled.

Well, the seats were filled in the post-Jordan years. The tickets were sold. The ticket-holders -- or those who ended up with those free ducats once they were handed down the corporate ladder a half-dozen times -- may not have always showed up for those games, but he made his bosses money. You won, Steve. And you should be proud of that. It was damned impressive.

Now, shouldn't that be enough? At what point does the "fan experience" become so over-saturated with nonsense that the players are going to start resenting their fans? And by "fans," I mean dorks who seem to care more about a steamed "beef" sandwich with thousand island dressing on it than the biggest win of their hometown team's season.

It's pathetic. And the blame, as it has for years, falls on one man.

So Steve, if you come across this post someday in a search engine, kindly consider a change. Move it up to 110 points, down to 90, maybe 50 points by halftime, or dump the thing altogether. It was interesting for a spell back in the 1990s, when Jud Buechler or Joe Kleine were the ones nailing baskets to send the Bulls over the 110-point mark, winning the fans a taco. But now that the seats are full of the type of non-fan that you've doggedly chased over the years, the reaction is different.

And the reaction from the players, and I know you can see this, has changed. They hate it. It's the last thing they should be thinking about toward the end of a game like Tuesday's win. And at some point, little things like this are going to add up, and cost the team a good player. Or prevent the team from signing a player that it would like to have. Just so the punters can pick up a free sandwich here.

Tough to argue: The 'Love It Live' experience (and commercials) are getting lamer by the season. The assertion that Bulls marketing feels as much of a part of the Bulls success as the team itself was explored way back in 'The Jordan Rules'.  And before Hinrich's missed free-throw he got a talk and a smile from Tyrus Thomas. Whether Tyrus told him to make it or miss it, no doubt the crowd result was on their mind.

While they've kept the building filled in 10 post-Jordan years, the goodwill eventually is going to run out. But maybe the 'casual' fan likes all the crap, as it distracts from the mediocre basketball. 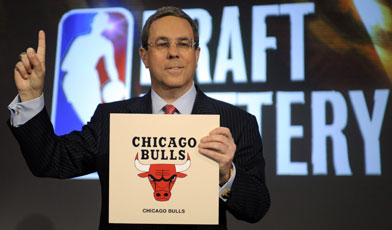