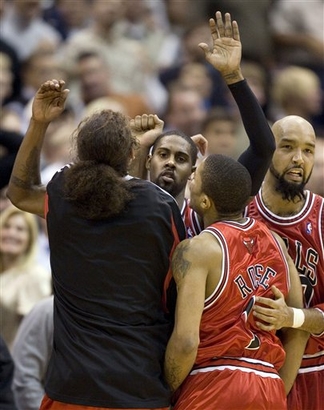 First regarding the final hero of the night, Larry Hughes. Finally, all of those forced up leaning 22 foot jump-shots paid off. He's practiced that in any situation, with any group of teammates, and against any opponent. So he knew how to get it done as the clock (which he couldn't even see as the Jazz arena was a joke tonight) expired. May this get you traded after all, good work!

But this was a game that was truly won by Derrick Rose. Faced with daunting odds: not only the Utah Jazz, but his own coach who left out an atrocious defensive lineup and ran out of time outs, Rose was sensational down the stretch. Beating his man at will and letting the Jazz do what they do best, foul.

This could've played out like any other blown lead over the past several seasons due to mismanagement (why do our coaches not value rebounding and defense in crunch time?), but that's the difference when you have a player like Rose, who can make something happen on every possession, even if they're disorganized ones.

The Jazz were without most of their team tonight, but a win in their arena is still a nice prize. They catch another break with the similarly (though Manu is back) banged-up Spurs on Wednesday. So while it may not be a pretty road trip, and this team is still pretty much a mess...the results may be successful after all.

Good: Tyrus played a lot more than he had the previous few games, did some decent non-scoring work. Gray had some key offensive rebounds. Noc did hit a couple shots in the 4th to partially mitigate his damage on the other end.

Bad: Tyrus had only 2 points. Him and Noah were again buried at the end. Gray was out a bit too long. Thabo got a DNP.

Terrible: Luol Deng. What the hell was that? Either he's still hurt, or he really is lost. Up there with Tyrus' jump shot early in the season, Luol's one-on-one play is something that was worked on over the summer but is now being showcased to the team's detriment.